Guardians of the Galaxy actor Chriss Pratt and Anna Faris of sitcom series Mom made a shocking announcement via social media that they are legally calling off their marriage.

The fans sank to the bottom when the heart breaking news about Chris Pratt and Anna Faris legal separation broke out. Chris and Anna fell in love while working together in 2007 movie “Take Me Home Tonight”.

According to Forbes 2016, Chriss Pratt is one of the Hollywood’s highest paid actor whose net worth is $US26 million. He was riding high on success with his film franchises Guardians of the Galaxy and Jurassic Park. On the other hand, Anna Faris, an American sitcom Mom fame earns around US125,000 per episode. That’s why the divorce is assumed to be one the expensive Hollywood separation.

Also Read: Kevin Hart ‘Laughs Off’ On Rumors Of Him Cheating His Pregnant Wife Eniko Parrish

Whereas, Chris shared on FB –  “Anna and I are sad to announce we are legally separating. We tried hard for a long time, and we’re really disappointed. Our son has two parents who love him very much and for his sake we want to keep this situation as private as possible moving forward. We still have love for each other, will always cherish our time together and continue to have the deepest respect for one another.”

Legal experts say that if the couple have not signed any prenup agreement, then Chris will have to give away half of his fortune to his to-be-divorced wife Anna. Chris Pratt made a good money after marriage and if they didn’t sign any prenup it would be one of the expensive divorce.

Though there is no concrete reason on why Anna brokeup 8 years of long marriage, fans are accusing Jennifer Lawrence for their divorce. Jennifer and Chris had worked together in 2016 movie ‘Passenger’ and Anna had indirectly claimed that her husband hooked up with Oscar winner while film shooting. Anna never revealed the name but she was somewhere found insecure about Chris and Jennifer.

26-year-old Jennifer is held guilty by twitterati’s for the split. Social media is bizarrely blaming Jennifer for Chris-Anna separation and looks like she is badly stuck in the controversy.

I knew that home wrecker #JenniferLawrence broke up Chris and Anna's marriage! pic.twitter.com/DAuggJgrOA

Not surprised by #chrisprattandannafaris, saw the press junkets he did w #JenniferLawrence last year and those two SIZZLED! 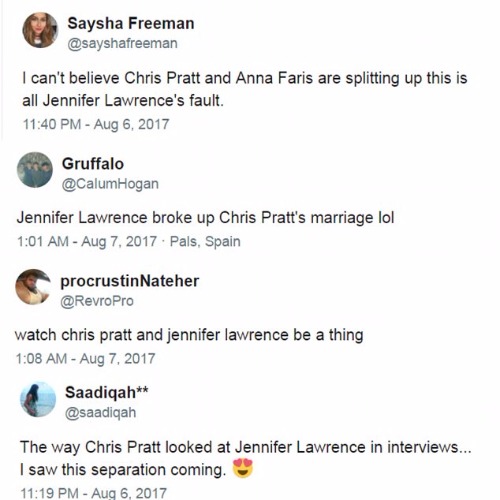